It’s hard to believe another month has passed, but here we are again, with more insights from the dev team for what’s happening with the game.

But first, let‘s talk about the endless contest that just wrapped up. I must say, I’m pleased with how it went – it seems lots of people enjoyed it, and we got a ton of feedback from it. It forced players to play the game a little differently and pursue different play styles to try and get as far as possible. We got a nice amount of submissions and some amazing discussions both on steam and on our community discord server that thought up of the best methods out there, and it shows, considering how large the highest score was! It’s great to see the community getting so involved!

Now, we tried something a bit different this time with the results. Rather than just a straight first-second-third ranking, we decided to go with some creative categories. After all, endless is a mode all about personal creativity; wouldn’t it be fitting to encourage multiple styles of play? Check out the winners: 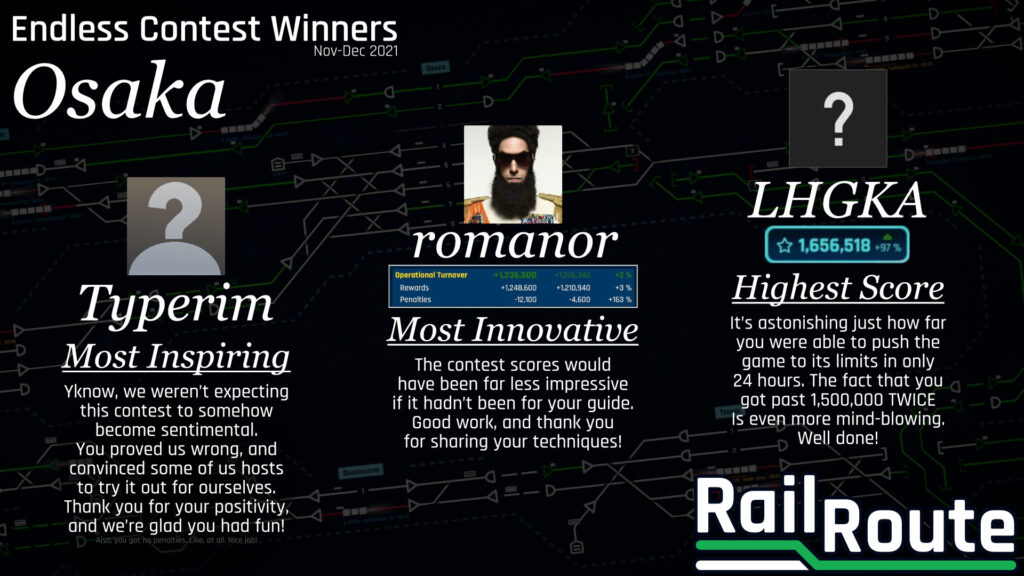 Don’t worry if you’re not on this list! We plan to do some more contests in the future, and for each one. Hopefully, we can even integrate contests into the game, and/or add steam leaderboards!

We’ve decided to simplify the version numbering system by removing the extra “1.” at its beginning. For example, Version 1.3 – the next significant update we have planned – will simply be Update 3. It’s not a big change, but was the “1.” really doing anything? Eh, we don’t think so, so it’s getting removed for simplicity’s sake.

Speaking of Update 3, we have some big ideas in the works. Do you want to hear about some?

We are introducing a brand new mechanic in timetable mode – the inventory – a selection of items you can place during your playthrough. The map creator determines the inventory while in the editor, which means this won’t interfere/mess up older maps that weren’t designed with this in mind. The map author can decide which sweets you will have at your hand to help you maintain your sanity while handling all the traffic. Be it either additional signals, automation sensors, or even the tracks; you’ll be able to make fun little changes to enhance your experience. Place them wisely! 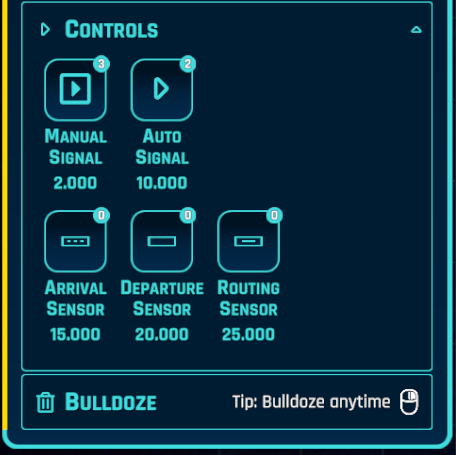 It seems simple, but we made our job a little more complicated. We have refactored a reasonably large part of the game to make this work. You won’t benefit from it in this update, but trust me – in the future, this will allow us to define new gameplay elements much faster. And it’s also the first step in our long journey to enable modders to easily introduce their elements to the game.

We have bigger plans with this feature in the following updates. For example, you might be awarded new inventory items later in your playthrough when you meet specific criteria, not just at the start. But that’s the song of the future; for now, we hope this new feature will give map creators more room for innovation and provide us with some great challenges!

The previous (timetable) contest winner, Eduran, was given the ability to choose any Quality-Of-Life feature to get added to the editor as a reward. What they wanted most was an in-editor trial train. Previously, mapmakers would need to add many trial trains to the map, load it, and keep track of all their speeds in a spreadsheet or text file to remember how long it takes for each train to get from point A to B. Now, it’s possible to run a trial train for any preexisting timetable. 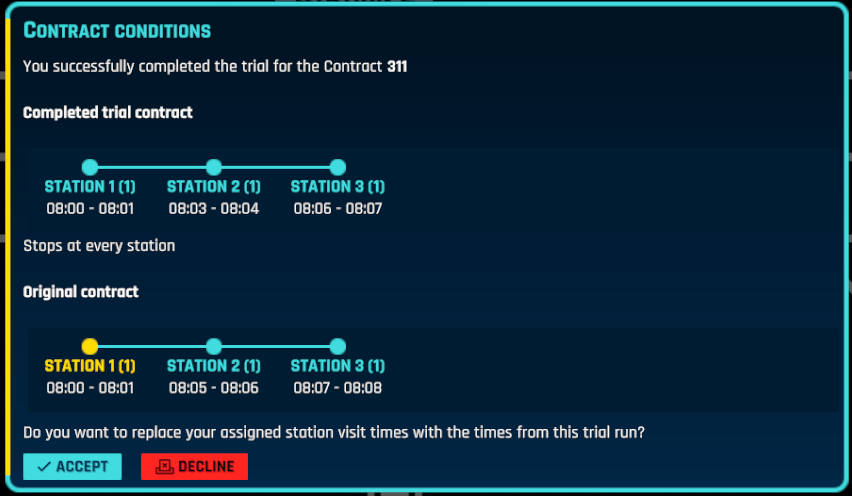 While Eduran only won one feature request, he made three… but we still managed to get them all in!

When editing the timetable in the map editor, you often have to change the time on multiple stops just to move one around, since adjusting the one stop messes with all future stops (or occasionally, all previous stops).Now, you can hold CTRL to also adjust the stops after the one you’re modifying, and hold SHIFT to change the stops above it. You can also combine the two modifier keys to change all the stops at once if you feel like it! It sounds more complicated on paper than in practice. Just give it a go when it’s released! 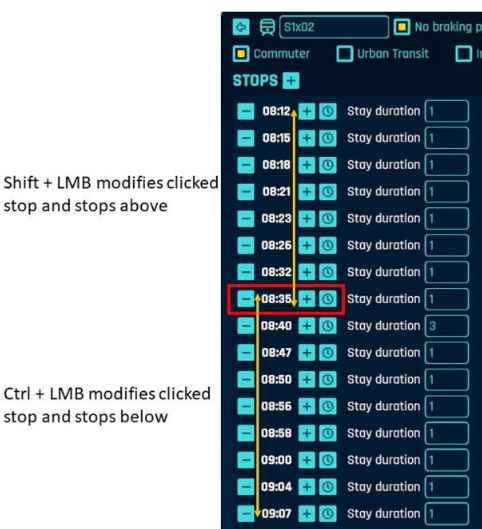 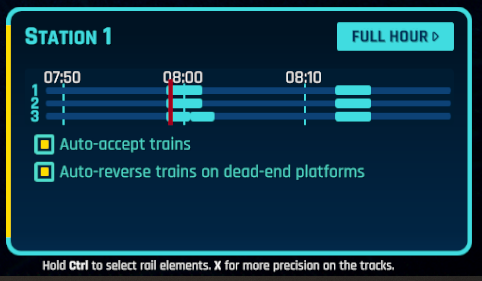 So, we’re adding colors to help tell the difference. 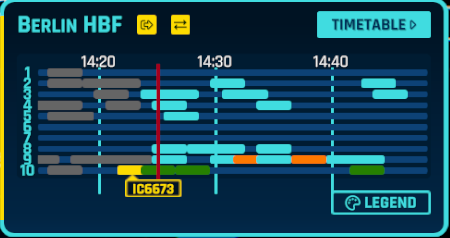 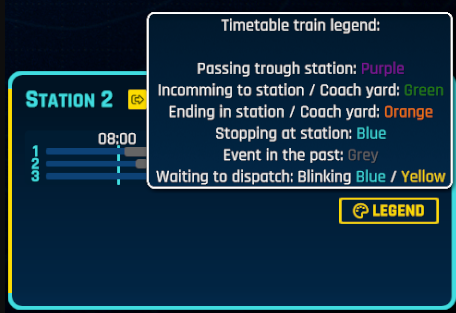 At first, we thought of just making each train type – Commuter, Freight, InterCity, Urban Transit – display in a different color. But after some discussion within the dev team, we decided to change it so that the colors represent what the train is doing at the station. If the train stops, it will have a different color than if the train passes through the station. If the event has already passed, it’ll display in grey. There will also be an icon to indicate if the train needs to enter the station. Together, these changes make it instantly clear from a glance at the timetable what happens with what train at any given station! 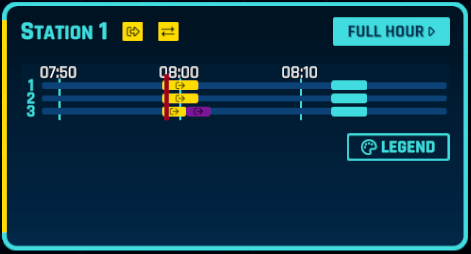 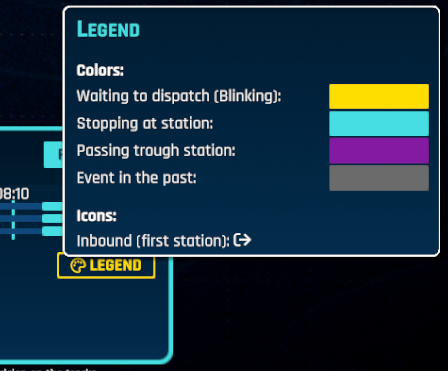 The more colors we add to the game, the harder it is for certain colorblind people to play it because of their difficulty distinguishing between colors. While we’ve been trying to keep the base game as friendly to these players as possible up until now, we’ve decided to implement new options that allow you to modify certain colors on your own so you can perfect contrast between the colors to help you see better. While it will make it harder for some newer colorblind players to start playing, it’ll hopefully help them find the perfect color combination! 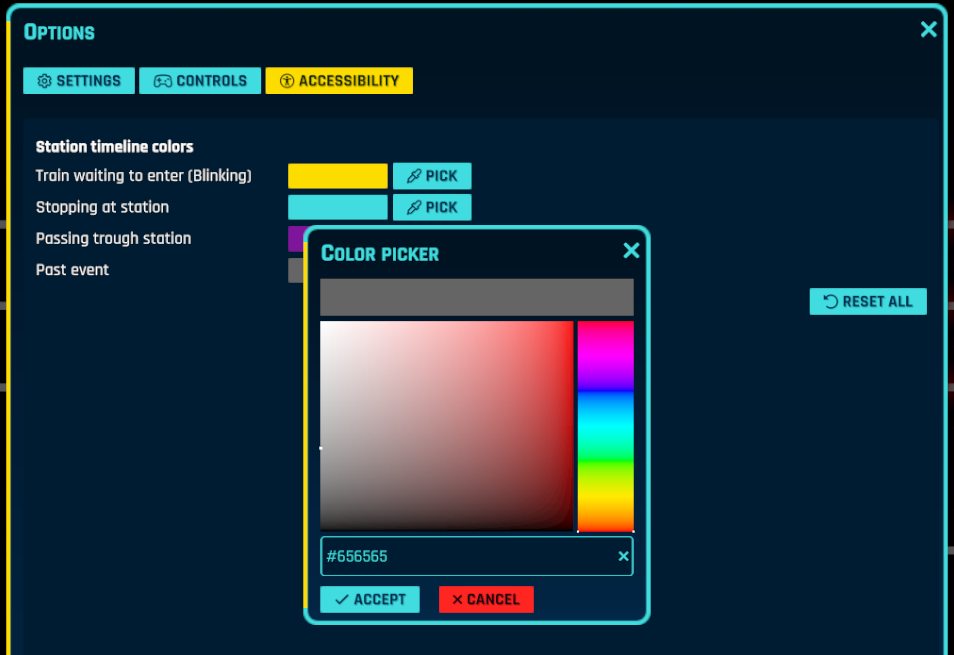 We are still improving the tutorial to help our newest dispatchers to get a good grasp of the game. We introduced three new chapters; In them, Jozic will check whether you understand the routing mechanics, teach you about the System Upgrades, and show you timetable mode. If you haven’t tried Rail Route, or even if you are a seasoned veteran, be sure to check that out to see where we are going. 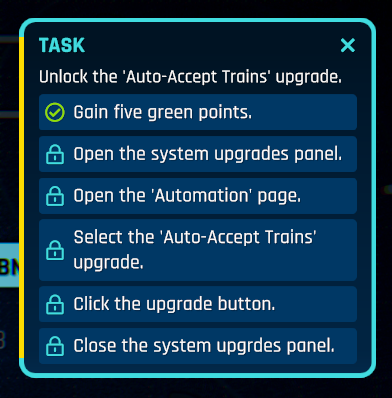 Until then, I wish you all happy holidays ;). See you in the New year and we’ll do some dispatching!
-Angel

By angelPublished On: December 20th, 20210 Comments