So, June was our release month and it was a great time to be with Rail Route, for sure! One of the asked questions we get is, “what order should I play the maps in?”And you know what? They’re good questions! There’s currently no way to tell how hard the official levels (and unofficial levels, for that matter) are without playing them yourself. We didn’t have any trouble with this back in, say, March when we had only three maps in the game, but now there’s a whopping twenty-three maps to navigate through. There needs to be a better way to find the correct map and organize the menus to find them faster.

As you may know, we’ve started preparing the next content update recently, and we have already done some groundwork (no major bugs incoming)! These new additions are pretty notable, and since they’re coming up soon, I should tell you all a bit about version 1.1.x.

The most important method of categorizing maps is the difficulty. There are many ways to determine how hard a level is and many ways to organize the difficulties. A five-star system was the first idea we thought of trying, but it felt more like a quality rating rather than a difficulty one. The idea was good, but the execution – specifically, the stars – was problematic.

So we took what worked and revamped it, and now there are these five difficulty rankings that we’re adding to the game: 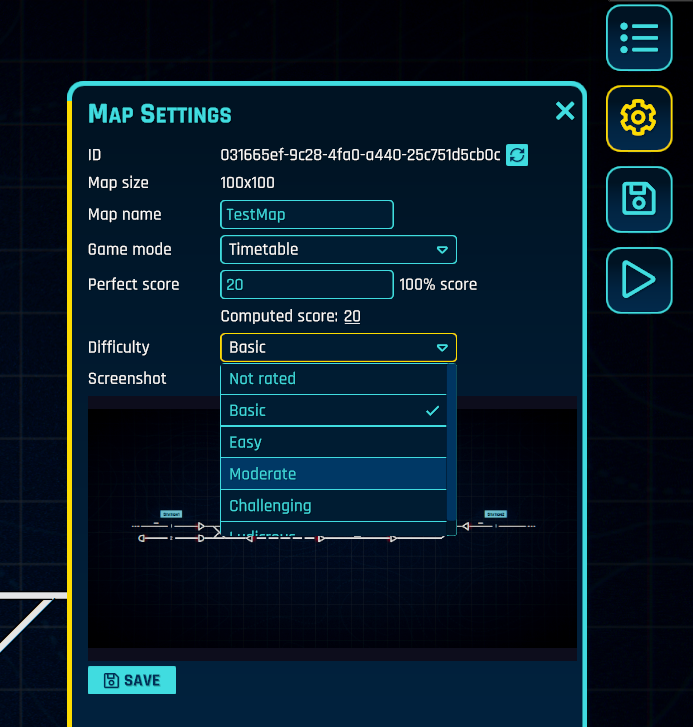 When you build a map, you can select how difficult it is. We discussed whether the game should calculate the difficulty itself, but we figured it was better just to let the creator manually determine how hard it is. After all, a five-hour level could be easier than a five-minute one, for all we know.

The only problem with this is that some people may think their level is easier or harder than it really is, but the net gain is worth it. So many creators will be better able to advertise their levels on the workshop with this new system for a pretty simple reason – It gives the level a difficulty tag. This will make it a lot easier for players to search for the exact kind of map they want.

And yes, all of the main game maps will be given difficulty rankings. Many people have gotten lost and started with harder maps by accident, even though the “first” map (Wakefield) is at the very end of the list when sorted alphabetically. This feature will help not only map creators but it’ll also help streamline a new player’s initial experience by letting them choose the exact difficulty they want.

By the way, here’s the difficulty of the current in-game maps. This section may be helpful for newer players.

We also added a few new icons and statistics to the main menu to help players identify the type of level they’re playing. These show the timetable length, how many trains you need to dispatch (for timetable maps), how many stations are there for endless maps, and the level’s difficulty. Maybe being able to filter an in-game search these statistics would be helpful, right?

The last thing we wanted to add to the main menu statistics was the map’s community rating on the steam workshop. There’s just one problem – people aren’t rating the maps. We need more people to vote. Going through the workshop can be pretty tedious just to give each level a thumbs up or down; So what if we just add it directly to the game?

When you complete a timetable level, the game will give you the option to give the level a thumbs up or a thumbs down. This will provide creators with a better idea of how much people enjoy their maps rather than just seeing how much they’ve been downloaded.

Now, being able to search for levels easily and vote on them is nice, but how do you know if they’re good? There’s no tag for that. With so much community content, there’s gonna be people who don’t know what they’re doing and make overly ambitious/large levels that aren’t fun to play. It’s not fun to download something only to realize it’s not the greatest level.

Well, the solution – at least, the current “fix” we’re trying – is a curated list of community levels. A small council of community members will play these levels and looking for the best qualities in them – fair timetabling, fun gameplay, and engaging timetabling. If a map can meet all three qualities, it’s added to the list, so you’ll be getting the best of the best! You might notice this list is very, very short. It’s not easy to go through nearly 250 maps in a reasonable amount of time. So if your level isn’t on here and you think it should be, you can request it by contacting SteR#4742 on Discord. Do expect the council to be very critical of your level, though. 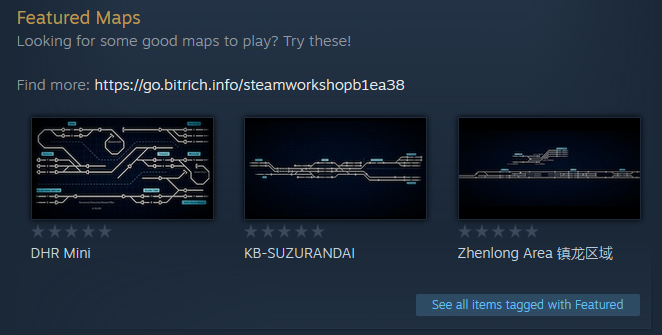 On top of that, there’s a new featured section on the Workshop homepage where we will feature maps, something like “What to play this month?” Well, why not try one of these?

As we mentioned in the previous blog post, it’s a work in progress, but we’re pouring some time into redoing the tutorial.

You can see it’s smaller and more task-oriented, but it’s in an authentic setting. The previous tutorial was too “disconnected”; there was no consistency for the player to follow along with; it was very choppy as if the tutorial was cut into pieces.

With this new tutorial, we’re trying to streamline the experience. Instead of hopping between a bunch of smaller, disconnected tutorials, there’s just one big one that gives you all you should need to know at the start of the game. And there’s no need to have any clunky transition between the tutorials and the game itself – some of you may have already noticed, but it takes place in the Prague endless map. Once you “Graduate”/pass the tutorial, it just drops you off right into the experience. The world is your oyster!

We will build on top of this platform later when we broaden the tutorial’s scope in future updates. It’ll help players catch on and know what to do in their first experience with the game :). But so far,  it’s looking great! You’ll have the chance to test it yourself on the unstable version somewhere soon. Please, give us feedback on how the tutorial feels from the video now!

I must admit this one should have been in the Early Access release, but we didn’t manage to do it in time. Well, here it is 😀.

When the sensor is configured to an unreachable or non-existent connection, it’s marked with a new warning icon. This small change will make a big difference when configuring a broken sensor. But what we plan next is to change the sensor placement; allow them to be placed anywhere and connected with the exact point on the track. This would allow much more possibilities in automation. You maybe say we will decrease the tension and give away too many resources (in terms of space), but when we plan to add more sensors and somehow allow them to be connected together in more complex logical gates, we would need that anyway! It will fit nicely. Not in this update but in the future. 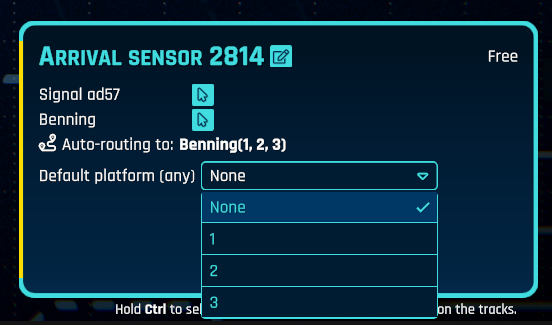 The image explanation is straightforward, right? The trains coming into that station that cannot be routed to the desired platform are routed based on this new configuration.

There’s more to come and more we are working on. For example, regarding the internals we did some refactoring on how we work with the dependencies in the code, improving the lifecycle of the game. We are also preparing a better interface on how to define new building elements! Hopefully, I’ll make it into a separate blog post in the future. It should be regarding the modding of Rail Route.

By the way, the game is translated into 13 languages, thanks only to the community! Big thank you to all who contributed either with the suggestions or took care of the language as the ambassador! And the good thing – a new language is being added – Japan. I mean, four new ambassadors are taking care of it! And I need to make one more update to the stable version; I want to link this blog post in the game, and yeah, I was too lazy to do some “News” system for it. Hard work, hard done! But I’ll do the language sync and put Japan into Options with it soon 😀.

We also changed how to approach the road map. We set up a new site where you can put your game suggestion (and vote on them!) while moved all content from the old Trello board there. We don’t want to have a steadily defined roadmap and we’d like to be more dynamic in terms of “what’s actually needed” or requested by the community. We have some bigger milestones to achieve but we will keep them internal for now. We did that during the alpha stage of the game and it worked very well. Our community is helping us drive the right direction a lot! Thank you. 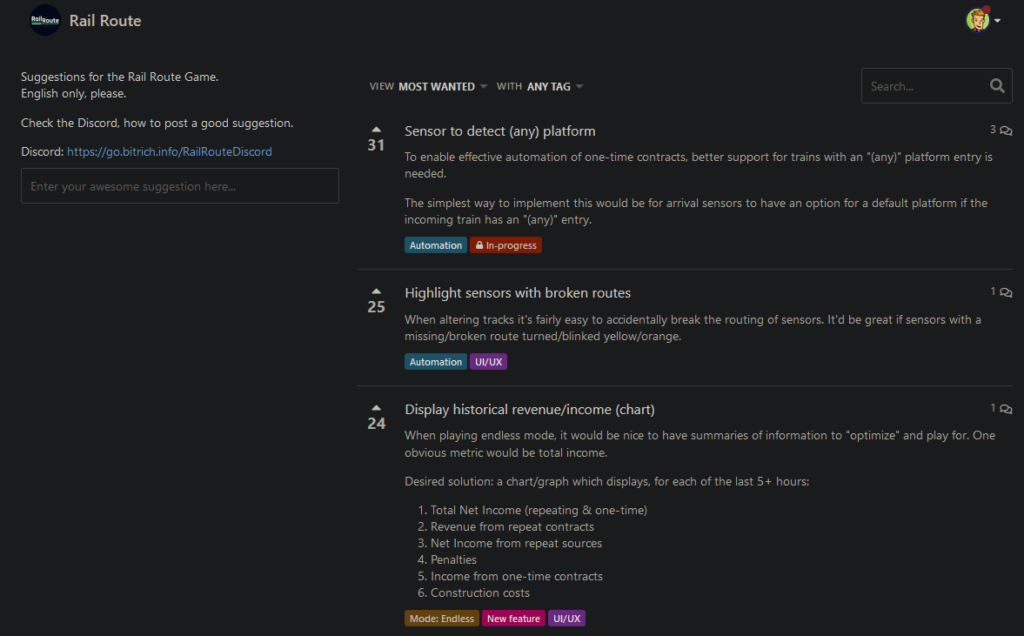 And what a coincidence that the two most wanted suggestions are already on the way into the next version!