It’s been a while, huh? It’s been three months since we released Update 2. While time may fly when you’re having fun, we’ve been hard at work here getting ready our next big update for you all. In fact, we’ve already released it – Update 3 is ready to roll! How about we dive into some of the new features you’re bound to see as you explore this latest update?

There’s a lot to cover! Let’s get started with the biggest news:

When you build a new timetable map, you’ll notice a new option which has been automatically turned on for you: The Inventory! 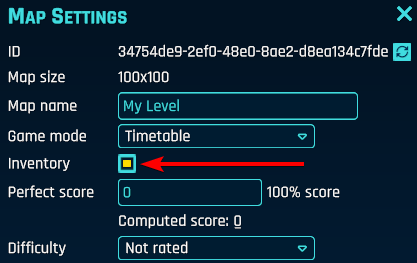 At first, it may seem nothing has changed, but as soon as you go to build tracks, you’ll notice something new: 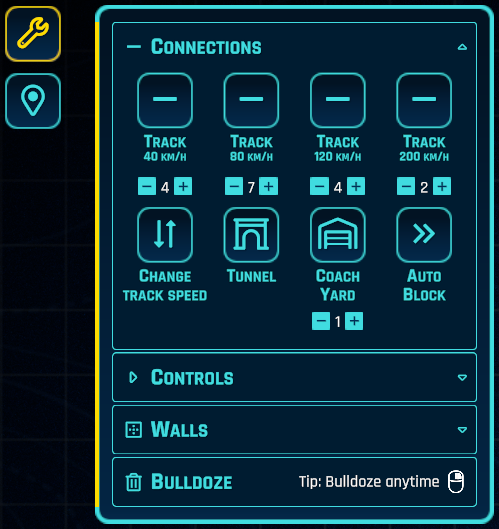 The new number beneath each item is how many of that item is available in the player’s inventory! You can add more of those items with the plus sign to the right of the number, or remove them with the minus to the left. It’s extremely easy to do!

Just remember – While players can’t delete the tracks you place, they can otherwise freely build! Use walls if you want to prevent certain connections from being possible!

Would you rather build a more classic timetable map, with no inventory whatsoever? Don’t worry! You can turn it off completely in the map settings. The classic style will live on!

How to Play with the Inventory

One way or another, when you need to use the inventory, you’ll find it in a familiar place with a familiar face: The build menu! Open the build menu in the upper-left corner of your screen to access the Inventory. 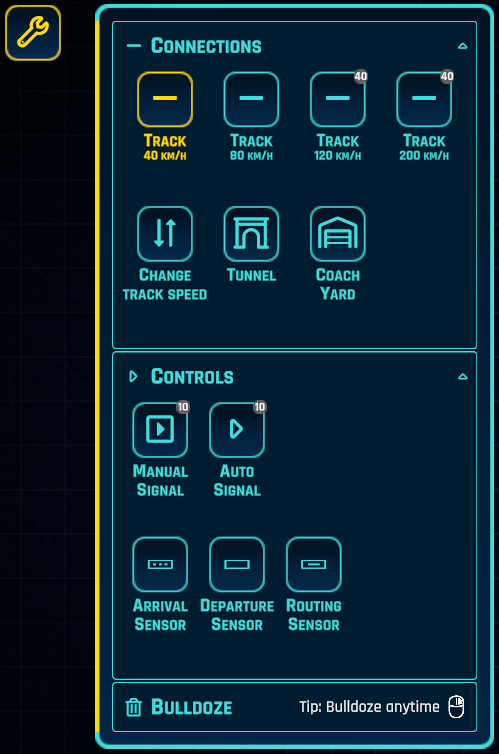 Unlike Endless, there’s no prices on the tracks… instead, there’s a number in the upper-right corner of each item that tells you how many you have to build with. Once you run out, you can’t build any more tracks unless you delete some you’ve already built! Use them wisely…

Building the connection works the same as building in Endless or the editor – Click on one spot to begin building, click on the blue destination tile to complete the connection! Right-click to delete tracks.

What if you need to build more than a straight connection? What if you need a passing siding to get two trains to their destinations on time? Well, don’t worry, you can build switches, both in tracks made from the inventory and permanent tracks built by the map’s creator!

Are you ready to really ramp up the way you play the game? There’s a whole new world of ways to make timetable maps with the Inventory! I can’t wait to see what you all can make and how the community’s new levels turn out with this mechanic.

As we’ve built Rail Route, one thing in the back of our minds has always been accessibility. We want to make sure everyone can play our game without getting overly confused, and will occasionally add new measures to help streamline how easy it is to grasp certain concepts.

One strong example of this is how we updated the track speed colors in the past. When we did this, we gave each track color stronger contrast from one another, in order for colorblind players (and, well, players in general) to have a much easier time distinguishing between track speeds.

Now, we’ve taken it to the next level!

No, these are NOT the new permanent colors. In fact, we’re sticking with the old colors as the default settings. These are the colors a user chose to play with on their own. You want different colors? Change them yourself! 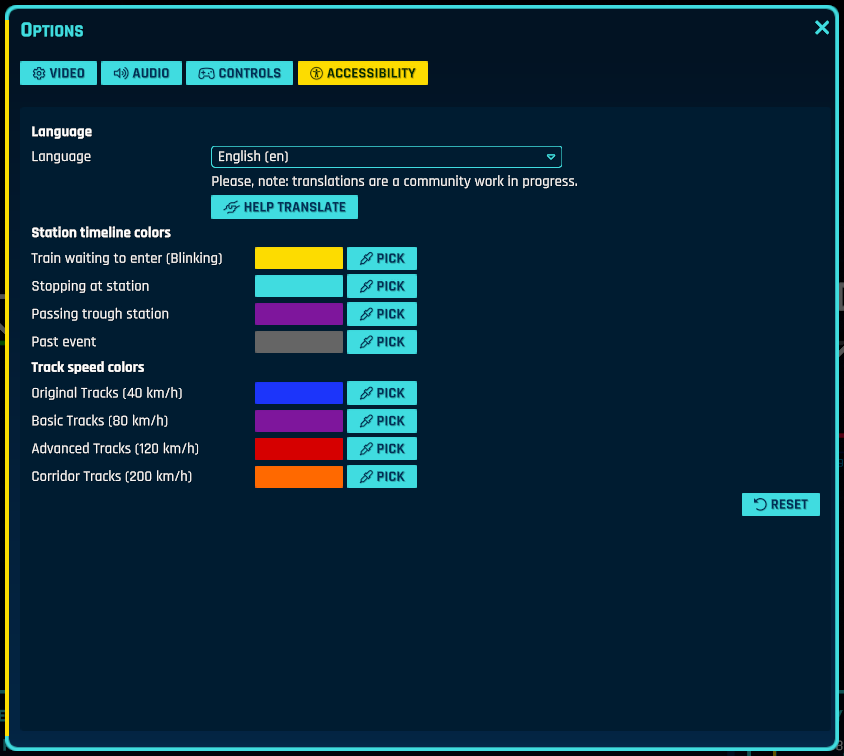 With the extra menus in the options, we’ve added one dedicated to accessibility. Here, you can modify the track speed colors as much as you’d like. Want to select your color directly in-game? Use the colorpicker to find what works best for you! 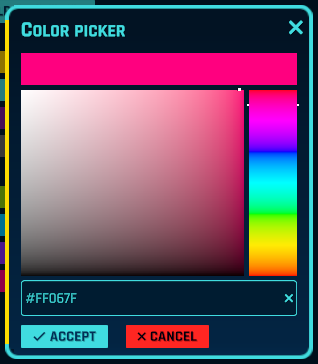 Got a specific hex code you wanna try? Don’t worry, you can just paste one in and roll with it!

Update 3 includes a better way to view timetables, which includes special colors for trains passing (but not stopping), trains stopping at the station, scheduled stops or passes that have already happened, and trains trying to enter a station. These new colors will hopefully help players figure out what sort of action needs to happen to what trains at what time when they appear on the schedule!

For trains entering the map, there’s also a special symbol in the center of the stop to help you

Oh, and all that color stuff we mentioned about track speeds we mentioned just a second ago? In case you didn’t notice, you can apply them here, too! Choose what works best for you!

One thing we keep getting asked about is “Why is my InterCity train running at 30kph? Why is it running backwards?” New players don’t seem to notice which cars are locomotives and which aren’t. For example: 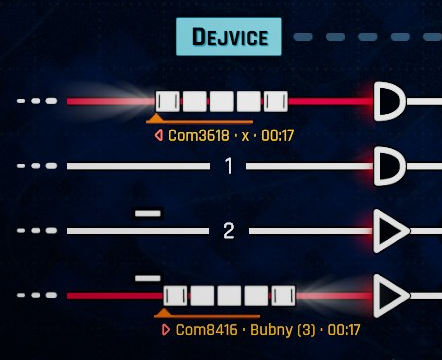 And, I mean, can you blame anyone for not seeing it? Sure, it’s easy to know these commuter trains can run in both directions without any trouble just because it’s a commuter when you’ve played long enough, but figuring that out because the first and last cars are locomotives is a bit of a stretch for new players, who likely won’t notice the small lines to indicate cab windows. It’s a bit of a pain to figure out. 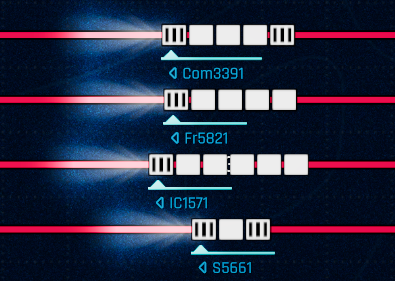 With our redesign, it’s way easier to figure out if a train has a locomotive on each end or not! The far more striking design stands out even at a distance, and will help you quickly determine if the train you’re running will be slowed down when running in reverse.
Here’s a couple of trains from our latest timetable map, WES. You can easily see the difference, and identify which trains can go which ways.

That’s all for now on the accessibility front, but we’re not done here! Expect more features in the future to help all types of players enjoy the game.

Wow, it’s been forever since the level contest ended! Maybe we need to do another one sometime soon… 😉
Either way, Eduran, the winner of the contest, requested three features. While we’ve been able to add two already, this third one took a little more time to get working… but it’s definitely worth the wait. Editor trial trains!

When you’re editing a train’s schedule in the editor, you might notice a new button in the lower-left corner: “Run Trial”.

Clicking this button will start the map… but with ONLY the train you want to test. 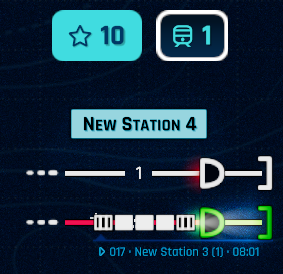 This way, you can figure out the time it takes to travel between two stations, and set it up correctly in the editor! No hassle from other trains, no more need to guess-and-check by playing the whole level – Just run your little trial around and take notes on when it arrives at each destination!

Have you ever been tired out, building sensors and setting up the same routes over and over again for a junction or station? There’s a lot of clicking that goes into perfecting your automation system, and it can be a real pain to do.

Well, now with far less clicks than before, you can just copy the settings from one sensor to another! It’s simple; First, click on the “Copy settings” button: 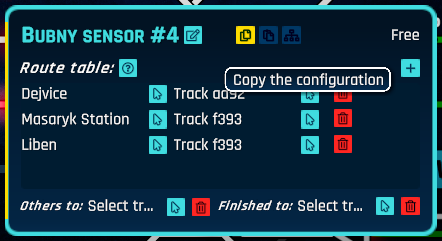 Next, select the other sensor you want to copy the settings to, and hit “Paste settings”: 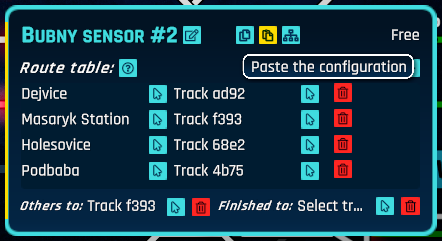 And Presto! Your settings are copied over! 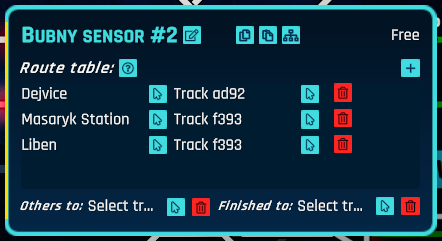 Just be careful, pasted settings will override all previous settings… 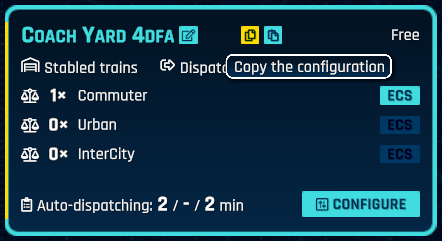 This can also be used to copy Coach Yard auto-dispatch settings!

Hopefully you all find this new feature as useful as I do! I’ve personally been using it on another playthrough of Prague, and it’s definitely saved me many headaches perfecting my automated system.

That’s all for now!

There are more changes, but I think we’ve gone on long enough here. Why not go out there and try out the update for yourself? See what other minor changes you can find! Maybe you’ll notice a new sound, or find one of the timetable maps we updated…

That’s all for now. We hope you enjoy the update! Happy dispatching to you all!