There’s over 750 maps on the workshop now! It’s seriously impressive how many levels have been made since our last contest. It’s roughly two maps a day! I’m really glad to see the creative minds of the community are using their sparks of inspiration well and giving us more and more levels to play. Keep up the good work! 💜

Last time we did a contest, we did it to try and highlight a new feature and get people to know about it more. Can you guess what new feature we’re doing this time? That’s right, the Inventory!

Submitting your level is simple: Just reply to this post with a link to your level! That’s all it takes. We’ll handle the rest from there.

If you would like to vote, just check the comments on this announcement and play the levels linked there! You can also check in on the contest submission collection, which will be regularly updated when new maps are submitted.

Once you’ve completed each level (or when you give up in frustration), just give the map a 👍 or 👎 either through the game’s interface or by voting on the workshop page for the level.

We’ll handle the rest of the process from there!

While we could just throw you out into the world without any guidance, the Inventory is a difficult system to use well when building a level. There are some tricky details you might need to work with/worry about, and some are things you should really know about before you get started building. While we won’t stop you from submitting any level you want to make, the rest of the community might, and we aren’t stopping them from voting however they want.

With that in mind, here’s some ideas:

For example, do you know which of these two levels a player would find more fun, just by looking at the non-inventory tracks already built for them?

If you think that the second picture looks more fun, you’re probably right. One thing we’ve noticed time and time again is levels that players need to spend time setting up rather than playing aren’t as fun as ones that let them dive into routing trains immediately. There’s no response from the game if they’re doing things right or wrong until the trains start moving, which makes the setup part of the map tedious.

We’ve already seen this in the past with sensor-heavy levels – The player spends a lot of time at the start setting up all the sensors, getting no immediate reward for their actions, and if they mess anything up, the response to that screwup arrive minutes – or even hours – later, making it harder to identify what the problem even was to begin with.

The delay between required player action and point-based rewards or penalties can be really frustrating, especially when the player has no exact idea of what tracks they should be building in the first place. Some junctions the player needs to entirely build themselves are okay, but when your map ONLY has stations and relies entirely on the inventory, it can quickly get tiring. it MIGHT work for tiny maps, but for any map with more than ten station platforms… we would recommend giving your players some sort of base to build off of.

Instead, give the player some base tracks to work with, and some freedom to add onto your original system with their own unique ideas. Why not give them a single-track border station for a few freight trains that they need to connect to the main route? 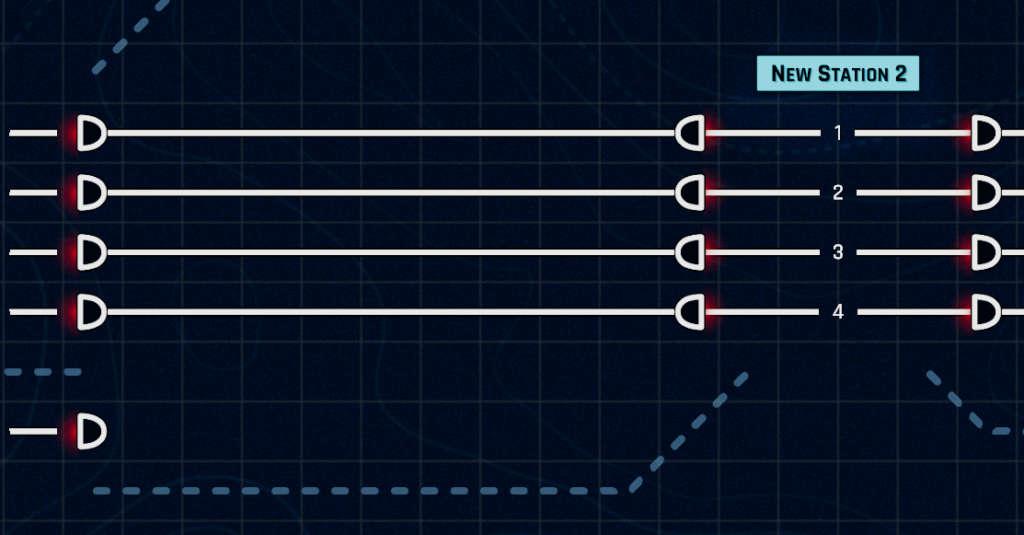 Or why not give them a bunch of tracks they need to add crossovers to, with an additional route to connect off to the side?

You should definitely keep track to keep track of is the walls between stations and autoblocks. Without them, your map can be easily broken… So make sure you close things off so nothing unintended happens! 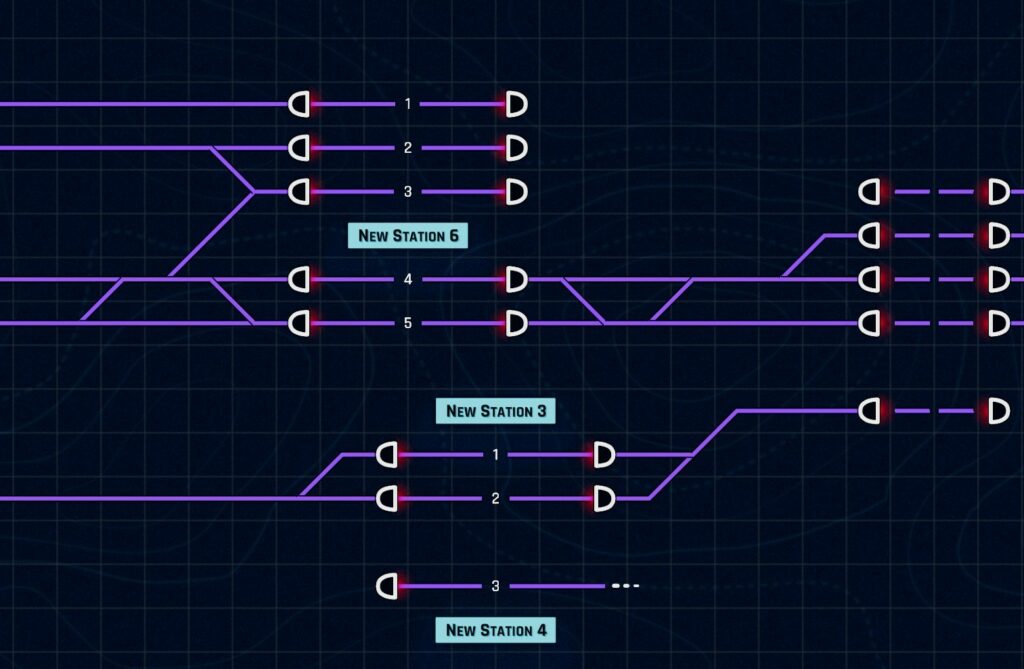 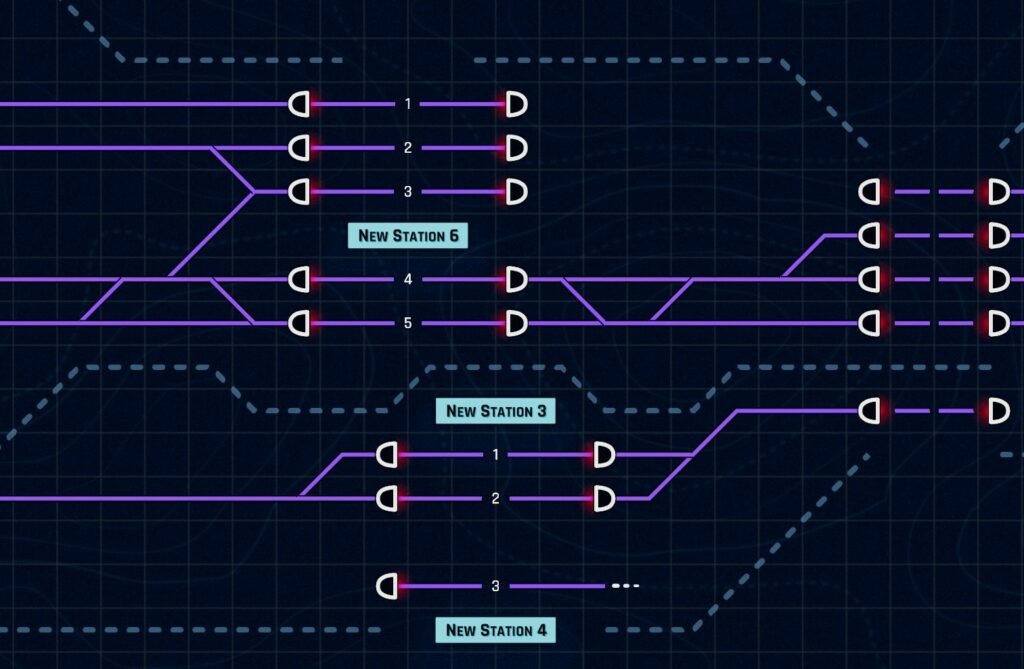 Station signs, Platforms, and Autoblocks also restrict players from building certain routes. Platforms and Autoblocks don’t completely stop players obviously, since they can just build up to the edge of the platform or autoblock to connect to it, but they do restrict throughput.

Speaking of player restrictions, here’s a little detail you might want to keep in mind:

While this isn’t exactly “walling players in”, it is an odd restriction you might need to worry about. Players cannot connect dead-end tracks to inventory tracks.

There is a slight workaround – If there’s a signal on that piece of track (whether the player built it or you put it there), the player will be able to build straight no problem.

It’s just a little thing that might mess up your level if you’re not careful, you know? 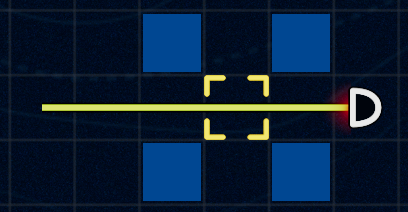 As long as the connection is legal, players can build tracks, place signals, and place sensors. Keep that in mind!

Also, it’s worth noting – Players can upgrade manual signals to auto signals (and vice-versa) and get the signal of the other type added to the inventory. If you don’t want people changing the signal layout, be careful with what you give them…

When the player has to figure out what tracks to build on their own, it can be quite tricky to get trains to their destinations on time. It’s not the best idea to hold them to the tightest standard of timeliness possible – Give them an extra minute or two of travel time between stations, and don’t pack the stations to the brim with trains.

It’s hard to test a map without tracks… So why start off without them? When testing your map, instead of building from the inventory while playing, you should make a copy and build the tracks in the way you would use them so you don’t need to build them each time you boot up the map.

The only problem with this technique is you have to remember to make the edits on both versions of the map so you can publish the version without the tracks! If your memory is good enough, you can achieve this by just using the copy and deleting the tracks you’re supposed to, but that might not be the easiest task for most players…

While that’s all we have for Inventory tips, that’s not all we have for level design in general. If you’d like to read some tips for timetable mode in general, too, You can check them out Here. It’s not much, but it’s better than nothing, right?

That’s all for now, though! We hope this little guide helps you get an idea of what to build, and I can’t wait to see what you all have to show for this contest! Good luck and Have Fun competing!