There are several types of train in the Rail Route with different modes of operation. Most common are the commuter trains (starting with ‘Com’ prefix) that stop at every station. Currently, there are two variants: 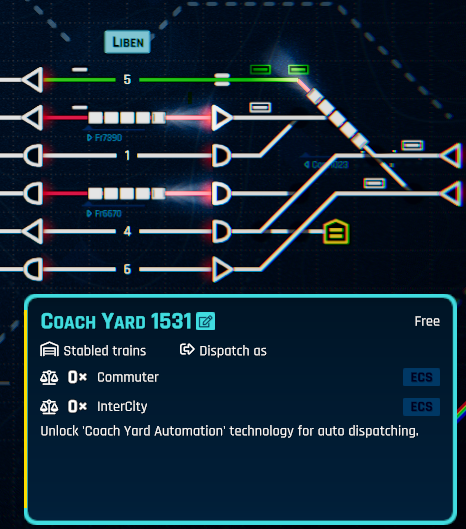 To break the rigid link between the converts from and converts to train, we are introducing the Coach Yard building. Once Coach Yard is unlocked, the player can build one close to each station. It accepts and stables Com and IC trains and keeps counter for each of them. If a train is present there, it can be dispatched manually according to the station’s timetable (receives standard reporting number) or as an empty coaching stock (ECS) train intended for moving the carriages between coach yards. 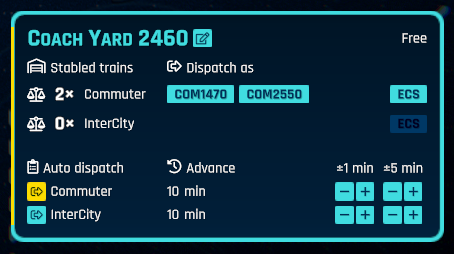 Once Coach Yard Automation is unlocked, the player can set up the automated dispatching and fine tune the ‘In Advance’ time needed for the trains to reach their platforms.

An offered one-way contract – train shall be stabled at Bubny

Indeed, these changes have some impact on Com and IC contracts:

So, once the player unlocks Coach Yard a Dejvice–Bubny contract is generated. The player can not accept it until he builds a coach yard for Bubny. After doing so, he accepts and dispatches the trial train to Bubny. After finishing its stop in Bubny, the train starts moving again and the player routes it to Bubny’s coach yard where it is stabled. Then, a Bubny–Podbaba contract is generated. The player accepts it and the trial train appears in the waiting list in the coach yard. The player dispatches it from the coach yard, via Bubny to Podbaba where the train exits the map. This repeats every hour until both contracts are active. 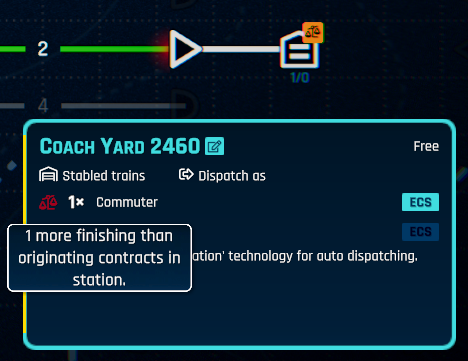 Clearly, if the player does not accept the Bubny–Podbaba or any other contract from Bubny, inbound and outbound train count becomes unbalanced and each hour another train is stabled in Bubny’s coach yard (recurrent contracts repeat each hour). This is indicated by the UI.

What worse, if the imbalance is in favor of the outbound traffic, the coach yard is gradually emptied and in one moment it is not possible to dispatch another train according to its schedule, leading to delays.

We hope that keeping an eye on balancing the stations brings more fun and chill to the game compared to the rigid conversion link. The player has much more possibilities how to resolve the unbalanced state and much more time to do so. To prevent the deficiency of trains even in case of delays he can keep some trains in reserve in the coach yards or dispatch an ECS to move a train from one coach yard to another where it is needed. With Commuter Creation unlocked, he can even create a “balancing” contract that moves a surplus train between the coach yards each hour. 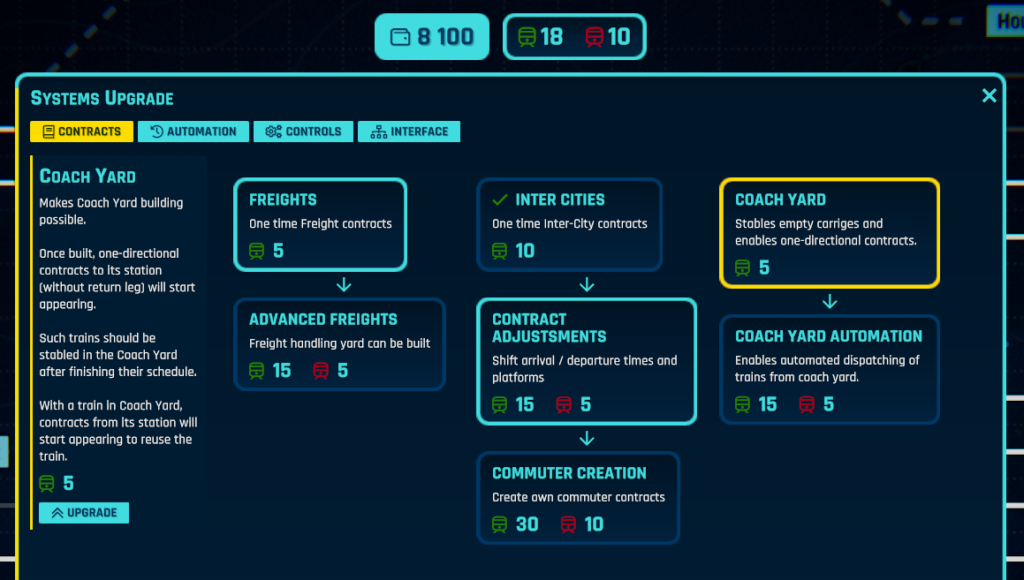 Experience points can be spent on the systems upgrades

Because handling this kind of traffic is quite more complex than the simple there-and-back trains, the player is awarded one Advanced Experience Point for each train that finished its schedule on time if it originated in a coach yard.

Another major change of coach yard operations is envisioned with future shunting overhaul. We had the shunting functionality in the game (now hidden). It includes shunting signals that only affect trains in shunting mode, detaching the locomotive and joining the train segments. We plan to rework it so that a train can be switched to shunting mode manually and then either convert to another train, moved to different platform or sent to coach yard for stabling. We also plan to task the player with splitting freight train to cars and composing new trains according to cars’ destinations.

Despite our previous claims we are thinking of publishing a demo before going to Early Access on Steam.

We also contemplate showing the game on The Steam Game Festival in June 2021. Wishlist the game on the Rail Route Steam page not to miss this event!

You are also invited to join our fantastic Discord community and share your feedback there. You may be granted access to non-public dev builds.