One of the currencies in the endless mode are the experience points. They are shown as green and red train points at the top of the screen.

You are awarded the experience point(s) for every non-delayed train when it reaches its final destination (together with the money reward). The amount is based on the contract definition as you can see on the screenshot below. 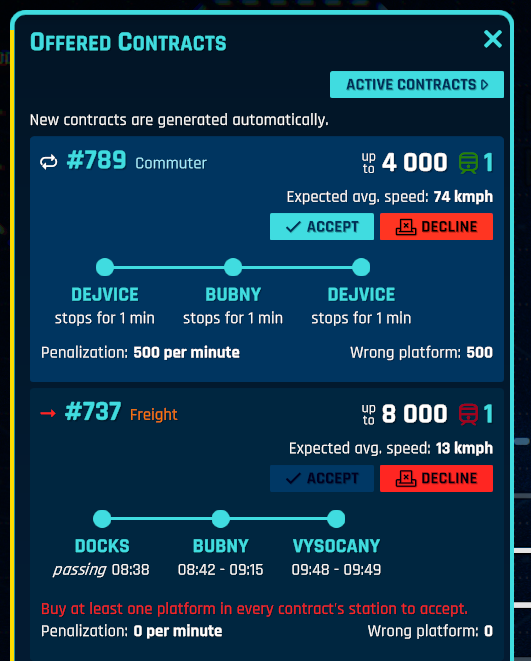 Experience points are really important – they allow you to unlock the various System Upgrades. These upgrades are helping you to handle the traffic, and are improving your user interface (and experience). The later you are in the game, the more traffic you need to handle. But thanks to these upgrades, it’s still manageable and usually more pleasant as well. The upgrades are non-linear and it’s to everyone’s personal taste to choose between them.

The unlocks are designed to be handy and helpful but not entirely necessary (a few exceptions apply, for example the ones that will allow you to get the red experience point, see below). Every unlock can help you to be more efficient, do less work or have a better experience with your dispatcher interface.

There are currently four categories of the upgrades:

As the name implies these are tightly connected to the contract system. They can adjust how and what types of the contracts are being generated or allow you to make adjustments or even generate your own contracts.

You can unlock new types of contracts thus more variety to the traffic you are operating. For example the Freight trains or the One-off Inter-City contracts. These contracts are really important as they are awarding the red experience points. So don’t forget to unlock one of these early! The red point is also awarded for the Coach Yard contracts that originate from the station in your controlling area.

Another group of contract upgrades are for the adjustments of the contracts. The ability to change the train’s timetable can be very handy in a lot of situations. Especially the change of designated platform is something that you may need in the early game. One of the upgrades allows you to optimize the contract (run the trial train again) and get a much better reward if you can handle it faster. 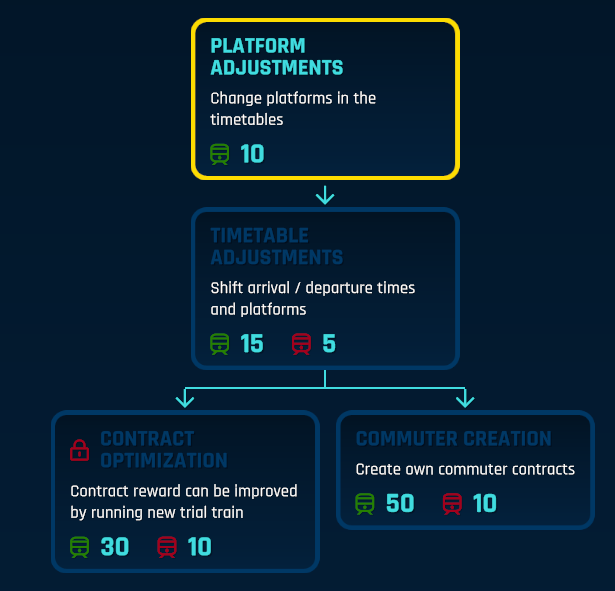 As we will release regular updates during the Early Access we already have the plans of what kind of new [i]unlocks[/i] could be in this category. You can expect the Upgrades that will allow you to have more offered contracts (current limit is 5 contracts) or be able to sort the offered contracts into corresponding categories (contract type, train type) and choose between them. Or even Auto-Decline feature that will reject contracts for you. Because we know that later in the game, there is usually a need for specific types of contracts. It will free your hands and go well with the design of the unlocks – be more efficient and do less work!

Next time, I’ll tell you more about the next category of the upgrades! Follow us and join our community Discord. The development is heavily inspired by the community suggestions.

We are also preparing to run the Steam demo, so stay tuned for the future updates!

By angelPublished On: April 8th, 20210 Comments