Let us announce that Rail Route 1.2 the Contracts Update is out!

We covered most of the upcoming news in two previous blog posts: 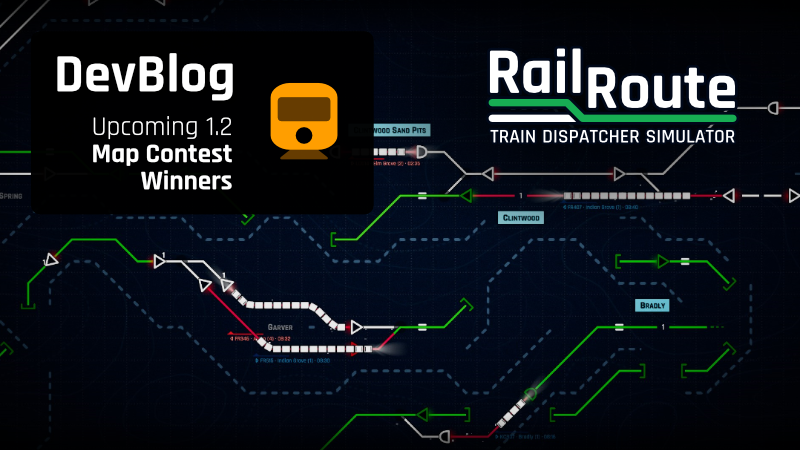 We mentioned it all before. We hope the tutorial will help the newcomers, but even the veterans will enjoy Jozic’s company. Just play Prague from the beginning! Watch the recording of the tutorial or jump to the game and try it!

Tutorial was brought to you by these changes:

We listened to our beloved community’s call to ease the handling of the contracts in endless mode. We are sure it will make the game more fun and less attritive in the long term. This gave the name to the whole update, although the tutorial consumed much more work.

Endless Score and the Cycle Report

Endless mode is satisfying itself, but we added a scoring model for the players to see their progress more visually. 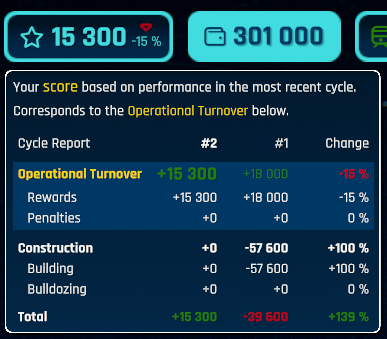 Cycle Report compares your performance between the hours of the game clock and provides more details to the score. We could compare the score also among the players, could not we?

UPDATE: Don’t make a ding sound in the first cycle
UPDATE: Sign “–” (en dash) shown instead of “0 %” in cycle report if the previous cycle field value was 0

The game now contains brand new sounds from Sergio Ronchetti. We will write more about this topic soon. Rupert Cole created a new track called Recollections to please your ears and it’s awesome!

For the sake of completeness:

Included with 1.2 are two new maps! Based on real locations, there’s one timetable level and one endless map – something new for everyone to try! WES is based on the Westside Express Service (WES for short) on the outskirts of Portland, Oregon, United States. The commuter service itself is small and simple, being only one route with just five stations served… But it shares tracks with a freight railroad! It’s your job to juggle the two commuter trains in an ocean of freights on an odd track layout. Make sure to pay attention! Some trains may need special maneuvers…

The odd layout of WES map to try your dispatcher skills.

Oh, and did I mention it’s our longest timetable map yet? Clocking in at one hour and thirty minutes, you’ll need to stay on top of everything more so than usual! There may be far less trains than usual with only 17 for the entire duration of the level, but that doesn’t mean you can slack off!

Meanwhile, our new Endless map sits on the other side of the Pacific ocean: Osaka! Japan’s rail network is unmatched when compared to the rest of the world, with trains running like clockwork; Even a delay of only a few seconds can be considered a late arrival or departure! While we won’t hold you to that same standard of excellence, how close can you get to it when automating Osaka? Many thanks to the Japanese community who gave feedback on this map while it was being made! We got tons of support and insight on how to represent Osaka while also making a fun gameplay experience, and the map wouldn’t look anywhere near as good as it does now if it weren’t for the community’s insight! 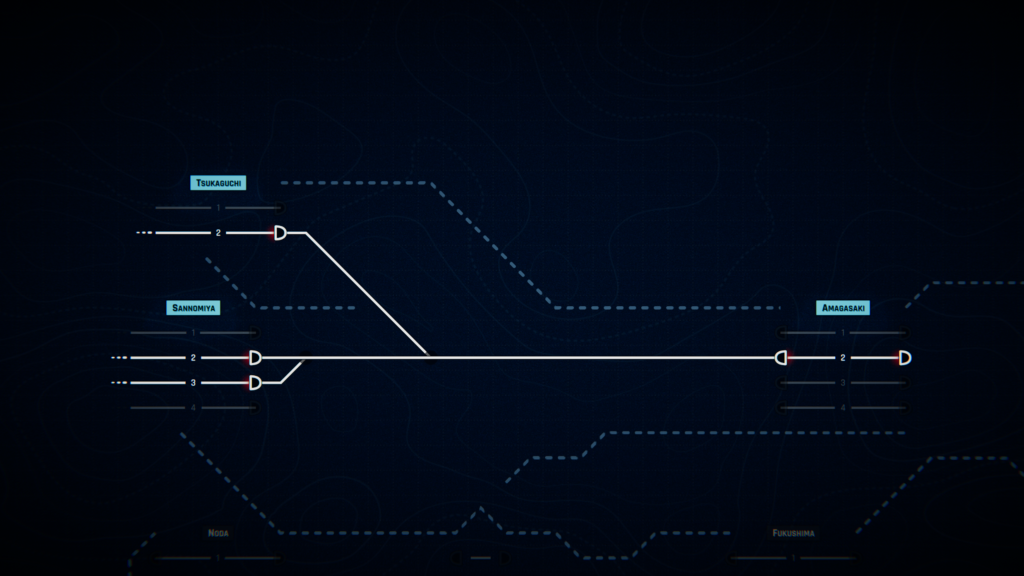 You start with just three stations in Osaka. Where you get is up to you!

We constantly strive to provide the best possible user experience for our players. Here is a list of what we did for 1.2:

NEW: Display tunnel connector and price during building
NEW: Explaining text displayed when not possible to bulldoze a signal because one of connections is not free
NEW: Maps can be unsubscribed from Workshop ingame
NEW: Show upcoming trains on the overview when no trains to dispatch
NEW: Research item that raises switch speed limit
NEW: Trains UI panel is no longer being highlighted (dose not require attention) when stop at queued auto signal
NEW: TrainVisits in station panel in editor are now clickable same as playmode
NEW: When mouse on queued auto signal it will highlight the first destination track
NEW: When TimeTable panel is maximized in the Editor, the station panel will be moved to the left of it instead of being disappeared
NEW: Zoom on active station when starting endless map

We work on Rail Route first and then compile a blog post that summarizes them in some more- or less-organized way. The byproduct of this approach is that we did changes that do not belong to any of the boxes. We learned how to live with this kind of chaos:

A curiosity for the geeks: the upcoming version contains a fix:

FIX: Time was erroneously truncated to milliseconds each tick what caused large (5 %) errors when running on normal speed.

We traced the bug to its origin and found:

Do not mistake the year – it is four years old! Rail Route starts to be a persistent topic in our lives… while still being and surprising adventure every day!

(The bug caused the trains to be slower (arriving seconds later) when running the game at 25×. They were correctly and equivalently fast on both speeds, but the game time accumulated slower at 1× because time step fractions were truncated.

On top of that, we solved a lot of issues:

FIX: A loop could be built by using a switch causing trains to become stuck
FIX: Active contracts UI filter options size and color were different
FIX: Cancel queued autosignal route caused invalid braking penalty
FIX: Departure sensor did not trigger when train came from other station with same platform number
FIX: Departure sensor was not triggering when train entered different track on same station
FIX: Dispatching a train from an unconnected Coach Yard was freezing the game
FIX: Distance traveled by train was wrongly computed in frames when it just reached the target speed
FIX: Long trains stopped at a station got braking penalties from manual signal
FIX: Minutes Slider value was being reset to 0 after closing and opineng the editor
FIX: Prevent floating signals and sensors after deleting their tracks
FIX: Prevent timer from being negative if you set it in editor to start from 00:00
FIX: Search for nearest platform when building a coach yard was improved.
FIX: Sounds did not stop playing on level reload or switch to menu
FIX: Special character “|” could be used in station name that would break loading the map
FIX: Stations for CoachYards in old maps assigned using old method, CoachYards in new maps using new method.
FIX: Steam workshop upload added all files in folder
FIX: Steam Workshop upload could fail if preview image already existed
FIX: Texts were dissappearing (linux, mac) – different material now used for UI and 3d space
FIX: Time was erroneously truncated to milliseconds each tick what caused large (5 %) errors when running on normal speed.
FIX: Train was able to escape autoblock if going full speed
FIX: TrainStoppedAtSemaphore event was triggered twice (most probably caused double penalty in the timetable maps)
FIX: Wrong localisation settings prevented station sign from being clicked in tutorial
FIX: Editing timetables from the past could cause desync in future trains for that contract
FIX: A loop could be built by using a switch causing trains to become stuck
FIX: Accepting the contract was possible even before the Accept Contract task in the tutorial
FIX: Active contracts could be rejected during tutorial
FIX: Build Track Task was started even if the track was occupied, preventing the building
FIX: Contract Accepted narration was being played regardless if you refused or accepted the contract after the trail train
FIX: Contracts were not being generated after skipping the AcceptContractChapter
FIX: Train of the FirstTrainChapter was considered as one of the trains that need to be dispatched in DispatchTrainsChapter
FIX: Cycle report UI text was overflowing with 1 cycle report
FIX: Auto signal route could not be removed when part of route was occupied
FIX: Bulldozing two tracks that have mutual start and end switches was not possible for one of them
FIX: Contract limit reached hint did not display actual limit value
FIX: Departure Sensor wanted to select a signal (was highlighted red) to connect the sensor to (misfiring shortcut valid for Arrival / Routing sensor)
FIX: Editor train search only found trains starting with search term
FIX: Endless hints button was not working on Prague map
FIX: Loops were not checked and message displayed when bulldozing by right click
FIX: It was possible to open other panels while menu panel was opened in editor
FIX: Only one of the tunnel portals was becoming occupied when train is inside tunnel
FIX: Version text overlapped offered contracts text
FIX: Tooltip panel was improperly padded
FIX: Selecting station sign was not showing you the scheduled trains in the station panel if you were adding new stops for trains
FIX: State of the train in the train label detail was showing “stopped” instead of “stopped at signal” if the signal was queued
FIX: Station blinking sound has not been stopping
FIX: Station Timtable panel was not being closed using ESC button
FIX: Train color was staying white after you select it
FIX: Upgrade price tags had wrong size in some orientations
FIX: Various improvements to better visibility of bigger texts
FIX: Was not possible to highlight a track when choosing UpgradeTrackSpeed mode if that track was so short and is surrounded by tunnels

Thank our great community for helping us pinpoint things like this. If you would like to join us, we are on Discord!

By mithrilPublished On: November 10th, 20210 Comments