We are running a weekly contest for Rush Hour again, and we’ve prepared a nice map that is always full of commuter services from both ends of the city – Oslo Rush Hour. 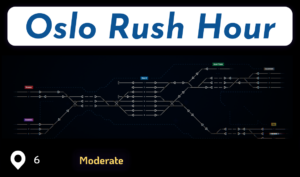 If you would like to feature your map in the following weeks, please let us know in the comments or jump onto our community Discord and speak to Mr. Pickle, our new Community Manager! He will also be responsible for featuring maps in the Workshop, so if you are a content creator, join a discussion on that topic :).

Lastly, let’s welcome him onboard.

Let me share some news from the development team about the upcoming updates. We are working on a Menu Redesign as I’ve shared some screenshots in one of my previous blog posts and it will be part of the next update. Let me share more screenshots of it. Please, note that these are still mockups from the graphical editor.

So, here’s the new game starting screen with your recent play and saves with some news.

This is just the beginning of our overall UI redesign. After the menu, the game will follow. Here are some concept images for you. Unfortunately, that won’t be a part of the next update.

We are changing how an incoming train is displayed on the board. When the train wants to enter your board, you see an icon next to a station sign. We are moving that icon closer to the element of origin. That means showing it beside a sink or a coach yard.

With income trains, there will also be a new reward icon that will spawn some time before the train is supposed to reach its final destination. That icon represents the reward for handling that train and should give you more understanding of where the train is heading and where the reward is.

We have started a BIG refactoring of how our construction in the game works. We realized there are still a lot of hassles and usability problems and want to remove them. Why you can’t place a signal on an empty space and then lay a track (that applies to all elements) or just move a sensor a bit? On top of that, building a tunnel requires two track ends instead of just laying a tunnel from one point to another (be it a free space, track, or whatever). We do not want these hassles, but we have built them during the game lifespan, mostly because of our internal code design. That’s what we redoing; we finally have enough feedback and experience to do it properly this time, trust me!

It’s a lot of work, and you’ll benefit greatly from improved usability (including the keybinding), but it won’t be part of the next update. I just wanted to mention it as it’s taking a lot of development resources. The best part is that it will allow us to introduce new game content much faster after we finish it! New buildings, new sensors, just new whatever.

Closing note: You will be able to rotate autoblocks and platforms.

By angelPublished On: October 28th, 20220 Comments