It’s the start of a new week, and I’ve got some fresh news from the development. As you can see in the last hotfix, last week went all great; we delivered a lot of fixes and some improvements to the menu I’ve covered previously.

Let’s see what’s in the bag for this week:

We want the new menu to be more integrated into the game scene, so we will replace the Pause Menu (when you hit the ESC) with it. It means ESC will open the full-screen menu where you can save, load the current game, or start another game quickly. No more switching to the Main Menu and back from your games. 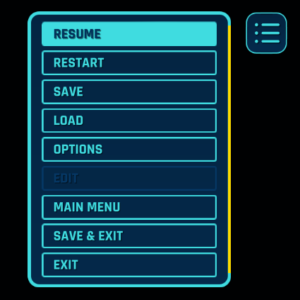 It requires us to make some addition, like the ability to save a game on the Current Hame tab and some additional actions inside the editor.

We got a whole category of UX improvement of construction (and bulldozing) planned for this month, and tracks will be the first. There are two improvements planned

As you can see, connecting two points will be as easy as clicking on the origin and the end. The game will calculate the track in between these points for you. You can still click in smaller segments if you want more granular control over the outcome. This will be the UX improvement of the month. It will not matter if other tracks need to be crossed! We could apply some hard limits on the maximal length of the track to make that happen.

We’ve finished the System Upgrades design for 1.0 and are now prototyping the UI before implementing it. I can say now that Upgrades won’t be categories (Contracts, Automation, Control, Interface) but according to the type of traffic (and color).

We will have three types of traffic (or contracts)

Every category will have its Upgrades to unlock, divided into Tiers, and an ultimate goal of the Endless map will be operating all of them in some amounts. Automation will be a great help to accomplish that. The primary metric will be the “trains dispatched per cycle,” which also gives you the progression in the Tiers dimension. I will talk details later, but you can expect a whole reworked freight traffic contracts and automation of your freight yard just in your Endless maps by 1.0 :-)! 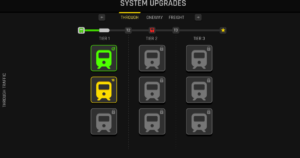 All screenshots are works in progress and do not represent a final state. That’s that. Be sure to drop me some comments below or on our community Discord.

Until the next week,
Happy Dispatching!
-Angel

By picklePublished On: January 9th, 20230 Comments